Preview of the text:

As we write this editorial and complete the second double issue of 2016, the world is still processing the shock of Donald Trump’s triumph in the US election and its immediate and anticipated effects, not only on global politics, climate, and finance but much more acutely, in the lives of already disenfranchised populations, including the LGBTQ community. That a man with endorsements from the KKK, with pending rape and sexual assault charges, known for hate speech against Muslims, immigrants, people of color, and women, someone who has threatened to overthrow the Marriage Equality act, and who has a running mate who supports “conversion therapy” for “curing” homosexuality and combatting AIDS, is hardly a sign of the “progress” of history. It is a horrifying testimony of the enduring anger and hatred of white heterosexist capitalist patriarchy against all others. 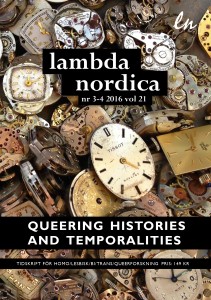